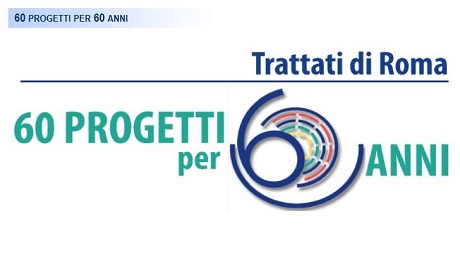 On the occasion of the celebrations for the 60 years since the signing of the Treaty of Rome of 25 March 1957, which ratified first  the establishment of the European Community, Italian Agency for National Cohesion and Representation of the European Commission, with the collaboration of all of the Managing Authorities of the National and Regional Operational Programs, realized a communication campaign, published on ANSA site, titled “60 projects for 60 years.”

It comes to a wide-ranging publicity campaign, aimed at giving emphasis to 60 representative projects for the development and growth of our Country, co-financed by European Structural Funds and Cohesion Fund, through the use of images which illustrate the practical use of EU funding and strengthen the perception of Italy’s membership in an international agency which, for more than half a century, effectively works on our territory, concretely promoting progress, economic growth, political stability and socio-cultural integration.

NAIS contributed to the development of the Data Warehouse for the project “TENECO-Support System for Tele-Neurosurgery”, selected among the 60 most significant European Research and Development programs, as part of the campaign “60 projects for 60 years.”

Implemented in Lazio Region by a Temporary Association of Companies and co-financed by the Regional Operational Program of the European Regional Development Fund 2007-2013 (POR FESR 2007-2013), the TENECO project aims to develop a Multimedia Computer Database for Neurosurgery, Neurology and Rehabilitation (MCDNNR), acknowledging the European regulations on the computerization of the Healthcare System through the introduction of the Electronic Health Record, and integrating them with analysis tools that can help optimize assistance use of public resources, in terms of both facilities and staffing in the fields of neurosurgery and neurology.

In detail, these are specific software tools and protocols that can store, sort, search and process,  for diagnostic, care, clinical-surgical and statistical purposes, all patient data (from the hospitalization to the final results, including the rehabilitation phase).

The creation of the TENECO computerized database allows clinicians an optimized use of a wide range of clinical information and digital images, providing a fast and focused tool for a high-level medical care.